Hard Drive: Bill Gates and the Making of the Microsoft Empire

Hard Drive: Bill Gates and the Making of the Microsoft Empire 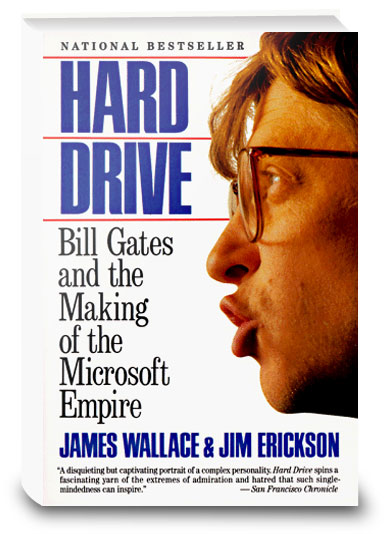 Hard Drive charts Gates's missteps as well as his successes: the failure of OS/2 and the embarrassing delays in bringing Windows to the marketplace; the highly publicized split with IBM, which then forged an alliance with Apple to battle Microsoft; the public relations fallout over various exploits of Gates; and the investigations by the Federal Trade Commission. Wallace and Erickson also examine the combative, often abrasive side of Gates's personality that has alienated many of Microsoft's rivals and even employees, and led to his being labeled "The Silicon Bully" by Business Month Magazine. They report:

In the early 80's, Microsoft's Multiplan lost out to Lotus 1-2-3 in the marketplace. According to one Microsoft programmer, a few of the key people working on DOS 2.0 had a saying at the time that "DOS isn't done until Lotus won't run." They managed to code a few hidden bugs into DOS 2.0 that caused Lotus 1-2-3 to breakdown when it was loaded. "There were as few as three or four people who knew this was being done," the employee said. He felt the highly competitive Gates was the ringleader.

The first two female executives hired at Microsoft in 1985 were recruited to meet federal affirmative action guidelines so that the company could qualify for a lucrative Air Force contract. One source says,"They would say, 'Well, let's hire two women because we can pay them half as much as we will have to pay a man, and we can give them all this other crap work to do because they are women.' That's directly out of Bill's mouth...." Gates treated one of these executives so badly that she asked to be transferred away from him.

Microsoft managers used the company's e-mail system to secretly spy on employee work habits. Only those employees who worked weekends could collect bonuses. In time word got out and some employees logged into their e-mail on weekends with a modem from home so it would appear they had come in.