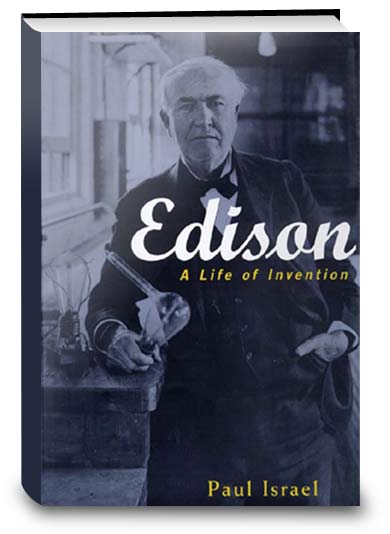 It has been said of Edison that his inventive gifts consisted of 1% genius and 99% hard work. Israel, coauthor of Edison's Electric Light and managing editor of the Thomas Edison Papers (in progress), in effect confirms that assessment.

Weighing the competing demands of biographical narrative and technological elucidation, he opts for the latter, showing Edison as tireless experimenter rather than inspired wizard. Israel portrays Edison as an improver of inventions and transformer of concepts into products, someone who applied himself pragmatically to the uses of electricity?from the telegraph and telephone and storage battery to the phonograph, incandescent light and motion picture.

Israel shows Edison as a manager of innovation, making the shift from private workshop to corporate research and development with income from royalties. An effective self-publicist, he became in the public mind the central figure of 19th-century invention. He lived, however, into 1931, by which time his brand of empiricism had given way to industrial laboratories on a scale he could not have imagined as a teenage telegrapher in the 1860s.

For a flesh-and-blood life one must return to such biographies as Robert Conot's A Streak of Luck (1970) or Neil Baldwin's recent Edison: Inventing the Century. But Israel draws on his subject's notebooks to provide an authoritative look into Edison's working methods, here leavened by enough personal detail to give the achievements shape. When Edison died, the nation extinguished its lights for a minute in tribute. He had not invented either, but he had made electricity work as no one else had. 20 illustrations.
Copyright 1998 Reed Business Information, Inc. --This text refers to the Hardcover edition.

YOUR LIFE YOUR LEGACY | eBook (pdf)

Edison and the Business of Innovation

Screw It, Let's Do It: Lessons in Life